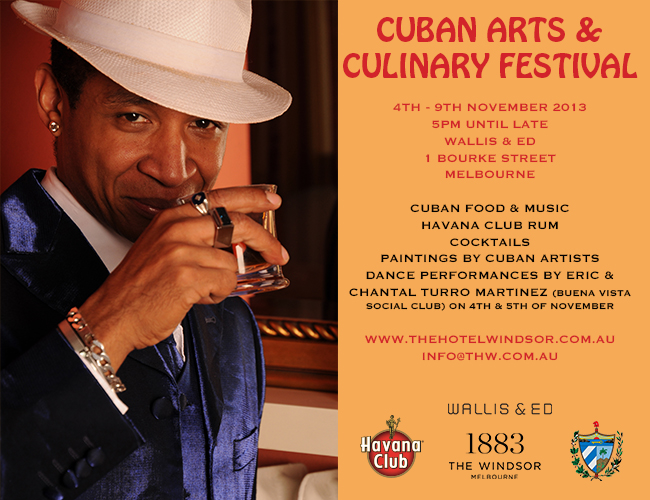 If you love a good carnival but not necessarily the Spring Racing kind then head to Melbourne’s Windsor Hotel during the first week of November.

The hotel is hosting Melbourne’s first Cuban Arts & Culinary Festival, sponsored by the Embassy of the Republic of Cuba, in its Wallis & Ed function venue from November 4 to 9.

Highlights will include a showing of 23 paintings by Cuban artists, many not seen before in Australia, famed Cuban dancers Eric and Chantal Turro Martinez, platters of Cuban food based on recipes provided by the wife of the Cuban Ambassador to Australia, Cuban music, and of course, Cuban rum and cigars.

“The Embassy of the Republic of Cuba is proud to sponsor this festival at Melbourne’s historic Windsor hotel,” Cuban Ambassador to Australia Pedro Monzon said. “Cuba’s complex history and culture is a reflection of primarily Spanish, African and Chinese influences, along with French influences from Haiti. These have merged over many, many years to produce the exuberant and unique Cuban culture that is now respected around the world and that fascinates so many people.

“Cuban music and dance and Cuba’s visual arts are among the best known aspects of Cuban culture and, along with our food, will be showcased at the festival in a way not previously seen in Melbourne.”

The hotel’s CEO David Perry said the week-long festival would be a vibrant and unique celebration of a special country.

“Cuba retains a special mystique for many people, although the power and beauty of its visual arts, music and dancing is known and revered around the world,” he said. “For the first time in Melbourne, thanks to the support of the Embassy of the Republic of Cuba, we are bringing together all the elements that make the rich tapestry that is Cuba today. It will be a one-off experience, and the chance for many Melbournians to see and learn more about Cuba.

“We’re very fortunate to have the full support of the Embassy here and their guidance in putting the Festival together,” he said. “It will ensure an authenticity that would simply not be possible to achieve otherwise, and has opened doors to access the very best of Cuba, from ingredients for the menu to the quality of the music, dancing and paintings.”

Cuban dancer Eric Turro Martinez, known as the king of Cuban traditional dance, was lead dancer during the 1990s with the Buena Vista Social Club in Havana. He now teaches Cuban dance in Australia with Australian-born Chantal Martinez. They will appear, along with a four-piece band, on November 4 and 5.

Oops, you forgot something.

The words you entered did not match the given text. Please try again.